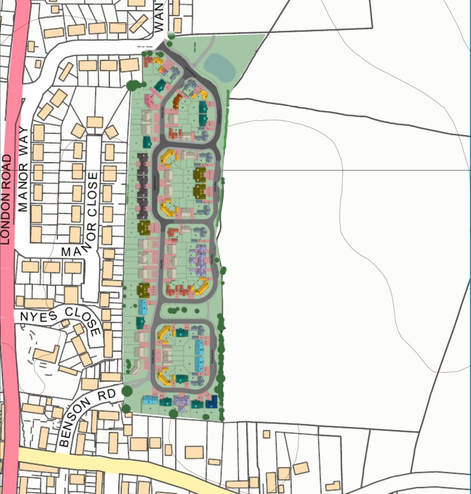 What has been referred to in years of planning applications as "land east of Manor Close" has now been built on, and has become the "Meadow Walk" development. The land in question is a large north-strip running from east of Manor Close at its northern end to east of Benson Road at its southern end. The houses (102 in all) have been built by Croudace on land originally the property of the Coleman family, former owners of Wantley Manor. The map on the right shows how  the new houses fit on to the existing development.

The main road running through Meadow Walk is Charlwood Drive, and its starting point is at the junction with Manor Way. There is no vehicular access to Benson Road, only a footpath.

Meadow Walk 1-2: Two photos from April 2016 showing the beginning of the construction at the Manor Close end - through which all motor traffic from the new estate will access the London Road. Access to Benson Road will be for pedestrians only.

Meadow Walk 1: The development was getting closer to its finished state when this photo was taken in mid-February 2018. The new estate is now completed and can now be reached from the end of Benson Road.