The Lydds is a footpath running along the top of the south ridge of the village, south of the main road to Brighton, with a stunning view of the South Downs. On the map below, the Lydds is the path (marked as ........ ) which runs from point (B) to point (C). From the High Street, the quickest way is to cross the western tip of the common from Henfield Common North to point (A) by the Brighton Road. Cross the road and walk up the track to Mill House (B) - the track runs parallel and to the east of Mill Drive. On reaching Mill House, skirt the house via a narrow path which runs down its right hand side - and you join the start of the Lydds. Turn left to walk east along its length until the path dips down to join the lane which runs from Holedean Farm to the Brighton road - by Lydds House (C). At the junction with this lane, turn sharp left up past Lydds House and then descend to the main road at point (D). Cross the road to walk back along along the common to the starting point at (A) - or go back the way you came for a different view.

South downs landmarks seen from the Lydds include, from west to east: Chantonbury Ring, Truleigh Hill and Devil's Dyke. 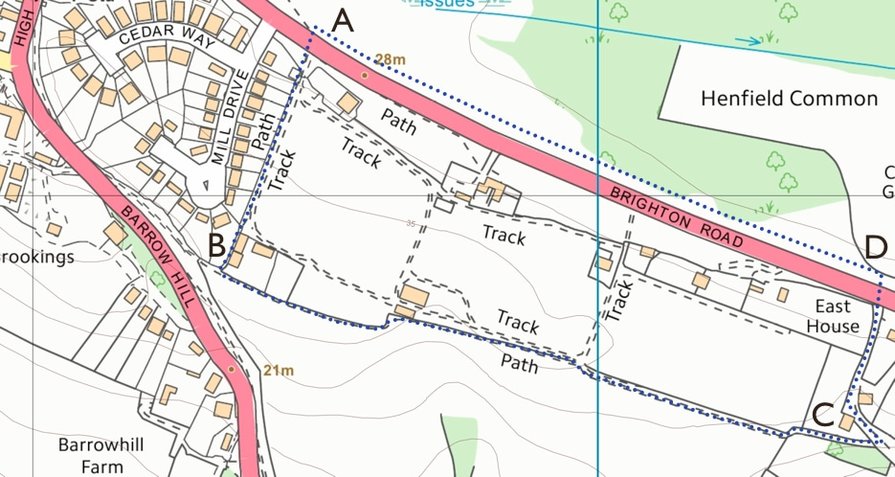 Lydds view, 1910: This black-and-white photo from 1910 shows the view from the Lydds - the steep, south-facing slopes to the south and west of the village. A footpath runs from the side of the mill house along the Lydds and past ancient farmhouses such as Holedean and Eastout. This view has changed very little in the intervening 100+ years.

The Lydds: The track running across the top of the Lydds, photographed in high summer, about 2005.

Vines on the Lydds: This row of new vines has been planted behind Mill House, alongside the start of the Lydds. Photo from May 2016.

Downs from the Lydds: A typical view of the downs, with Devil's Dyke on the left of the picture. May 2016.

The Lydds:  A similar view of the track as in COUNTRY VIEWS 2 above - this time photographed in May 2016.

The Lydds 1: Looking west and south, with Chanctonbury Ring in the distance. Late March 2017.

Grapes on the Lydds: Ripening grapes on the vines behind Mill House, early September 2018.

Vines on the Lydds: Another view of the vines from late March 2020 - all trimmed back and ready for new growth.