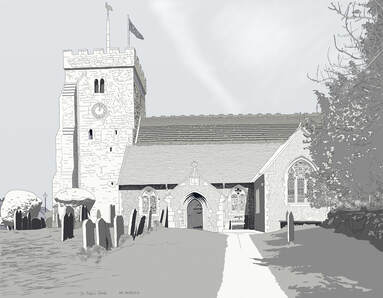 St. Peter's church stands on raised ground above Church Lane and Church Street. The building is 14th century in parts, but was much altered in the 19th century. It has a very good ring of 8 bells. All roads into Henfield are on a rising slope, and the church - the original wooden version of which is recorded as existing in AD 700 - is on one of the highest points in the village.

The black & white illustration of the church is by Mike Ainscough.

St. Peter's 1: This photograph shows the classic view of the church as you walk up past the Cat House - taken on a bright, cold Sunday morning in late February 2005. The yew walk is an outstanding feature. The church goes back to the 14th century but was extensively refurbished in 1870-71. The flint facings of the exterior walls are reputed to be some of the finest in Sussex.

St. Peter's 2: This appears to be a mother looking at the baby in its perambulator as she cross the entrance to Church Lane where it joins Church Street. St. Peter's Church is in the far background, and you can see Hacketts and Duffies - now conjoined as Hacketts - on the left.

St. Peter's 3: The photo shows the south porch of the church with the path leading down to Church Lane and the Tanyard. The children are standing in front of Tudor cottages.

St Peter's 4: This photo was probably taken in the 1920s, from a viewpoint just by Pinchnose Green in Church Street. Little has changed except that the Cat House appears to have a sign on it saying "Coal Merchant".

Whistler glass: Laurence Whistler - more properly Sir Alan Charles Laurence Whistler (1912-2000) - was brother to artist Rex Whistler. He was a poet, artist and glass engraver who engraved many church windows and other glass objects. I could find no mention of his engravings in St. Peter's Church in Henfield on the internet, so - here's a mention. The window in this photograph is situated on the left-hand side of the chancel and depicts a man sowing.

St. Peter's 3: A watercolour painting of the church by one of the Wade children at the turn of the last century.

Churchyard, St. Peter's: The path along the north side of the churchyard, with Appletree Cottage in the distance - from 2006.

Yew Walk, St. Peter's: This view looks down part of the yew walk with Church Terrace in the distance.

Whistler glass, St. Peter's: Another fine engraved glass by Lawrence Whistler. This is on the right-hand side of the glass showing the sower, and depicts a man harvesting apples.

St. Peter's stained glass 1-3: Three views taken in 2015 of some of the stained glass windows created by Charles Eamer Kempe (1837-1907) of Ovingdean. He lived for a time in Henfield while designing and installing the east window. Photos from 2015.

St. Peter's interior 1 & 2: Two further views of the interior, taken from each side at the back of the church. These and the photos below were all taken in 2015.

St. Peter's interior 3: A scan of a Harold Camburn postcard dating probably from around 1930, showing the pews before their replacement with chairs.

St. Peter's memorial 1: A memorial plaque to Contance Mary Worth Tracy, who died in 1910. Constance died in the Marylebone district of London, aged 45. She was born in Worth Matravers in 1865, and is listed in the King's College Collection of Pioneering Nurses, registering in 1896. She may well have worked at Holly House in Cagefoot Lane.

St. Peter's memorial 2: This carved wooden plaque is a memorial to John Gregoire, "A devoted servant of the church", 1981.

St. Peter's ceiling: The timbers and structure of the chancel ceiling.

St. Peter's: This postcard shows the entrance to the churchyard from the top of Church Terrace, complete with railings. An entry in the Vicar's diary for April 25th, 1940, reads: The iron railings round several of the older graves have been removed, and the look of the churchyard considerably improved thereby. The grave railings may well have been removed to melted down for the war effort.

St. Peter's south face: A view of the south face of the church taken in early May, 2016.

Yew walk, St. Peter's: Looking down the walk towards the Church Terrace gate - May 2016.

﻿Churchyard wall:﻿ The brick wall separating the churchyard from the garden of Hacketts.

St. Peter's Church: This is a black & white photo probably from the 1920s, showing the churchyard in a very overgrown state, and taken from just within the yew walks, which are not visible in the photo.

Dressed flint, St. Peter's: A close-up of the fine flint facing on the south wall of the church, taken in October 2016.

Yew walk, St. Peter's: A view from November 2016 showing the yew walk up to Church Lane and the side of Hacketts from the top of Church Terrace.

St. Peter's north face: The north face of the church, taken from the churchyard in late July 2018, with a yew walk and gravestones in the foreground. High summer - heatwave - brown grass.

Yews, St. Peter's: Some of the yews in the north side of the churchyard, late July 2018.

St. Peter's from Sobell Court: You can catch a glimpse of the church tower across Church Street as you leave Sobell Court. The wall is that of Lych Gates. Late July 2018.

Stained glass, St. Peter's 1-7: Details of some of the dedications in the stained glass windows. Taken in early August 2018.

St. Peter's main gate: The main gateway to the church from inside the churchyard, A photo from late September 2018.

St. Peter's south face: The south face of the church, showing the view up Church Lane to Appletree Cottage. The churchyard gate is missing. A photo from mid-December 2018.
Location