﻿Henfield Common is the major commons of the village and lies in the fork of the main Brighton road and the east side of the High Street. The western, rough grassed, side of the common (A) is bordered on the north by  a bed of reeds, with the Henfield Common North road above that. Eastwards, the common is bisected by a stream, with fairly dense woodland to the north (B) and lighter woodland (C) on the south side. Area D is the Memorial Field, created between 1948 and 1951, used for football in winter, which joins up with the cricket pitch. Two short footpaths cross the common at the western tip, running from Henfield Common North to the Brighton Road. A winding footpath skirts the northern edge of the dense woodland, running from Henfield Common North to Swains Farm. A straighter path runs more or less parallel to the Brighton Road on the southern edge. (Footpaths marked as ....... on the map). 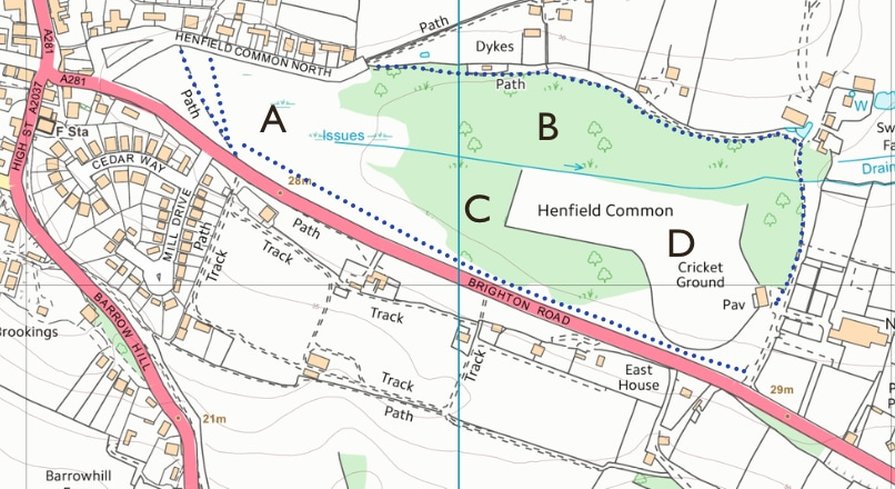 Henfield Common 1: A view north from the long footpath that crosses the common from the cricket field to the back of the High Street. The reeds are in particularly good shape in this photo, and I think it was taken in the autumn of 1996.

Henfield Common 2: This black & white view is very similar to that of "Henfield Common 1" - but much older. You can see that reeds and grasses are more cut back than in later years, but the two visible footpaths - one running down from the lane by the houses, and the other running across  the common - are there today.

Henfield Common 3: Henfield Common in 1911 - cows graze and children play outside the former school, oblivious to non-existent traffic. The White House - not looking particularly white - and called Clifton Cottage at that period, can be seen in the distance.

Henfield Common 4: If you turn left at Golden Square, at the bottom end of the High Street, and walk along the main road a few yards left, into the lane labelled Henfield Common North, this is the view that you can see: the main road runs south to Woodmancote, Poynings, Pyecombe and Brighton. This photo shows people on foot, a man on a bicycle and two very early motor cars going about their business.

Henfield Common 5: This path meanders along through the woods which bound the north boundary of the common. It runs from Henfield Common North to the cricket pavilion and Swains Farm shop.

Henfield Common 1: A black & white photo from 1940 showing the common in the snow, with the windmill in the distance.

Henfield Common 2: This black & white picture shows the rear of the houses in Golden Square and was taken in 1966.

Henfield Common 3: A postcard from about 1910 showing children and cows relaxing on the common.

Oak on Henfield Common: An oak in full leaf, taken in July 2015.

Henfield Common path: This footpath, popular with walkers, runs alongside the woods in the middle of the common, with the main Brighton road on the left in this picture - one the other side of the bank which was raised some years ago to prevent the invasion of the common by travellers.

Henfield Common 1: The reedbed on the common always looks fantastic on a sunny winter's day - as golden as a wheatfield. This shot was taken in January 2016 and shows the reedbed with the houses on Mill Drive in the background.

Henfield Common 2: Another shot of the reeds showing the White House in the background and, up on the Lydds, the Mill House.

Henfield Common 1: A photo from mid-July 2016, showing the western part of the common after summer mowing in readiness for the annual funfair.

Glade, Henfield Common: This photo shows part of the pleasant woods on the southern side of the common, below the open grass area. A photo from mid-May 2017.

Bluebells, Henfield Common: Another photo from mid-May 2017, showing bluebells not far from the photo in MISCELLANY 17.

Henfield Common 2-3: These photos from mid-July 2017 show the common and one of the footpaths crossing it - newly mown in readiness for the summer fair on 22nd July.

Henfield Common 4: A photo taken during the "golden hour" - the hour before sunset on a summer's evening in early August. It shows the houses on Henfield Common North viewed from the grasses and bushes.

Football pitch, Henfield common, 1 & 2: The football pitch on the common, adjacent to the cricket pitch and one of three football pitches in the village, was becoming increasingly waterlogged over the years. A network of streams and aquifers runs underneath the village, and many areas can flood or become waterlogged at times. The football pitch on the common was created by ex-servicemen returned from WW2 and, over the years, gave rise to a camomile-filled field. A grant from the Sports Council was obtained to drain and resurface the field, but the project was delayed for a while through the efforts of an environmentalist from outside the village. He was concerned about wildlife areas being changed to other uses, believed the pitch with its camomile and rare plants should be left untouched, and involved the Sports Council, Woodland Trust, etc. in an attempt to stop the work. Eventually, it was proved, with photographic evidence, that the pitch was created originally over 60 years ago, that camomile was growing in quantities nearby, and that the so-called endangered rare plants were, in fact, not on any endangered list. The work went ahead.

The photographs, from early September 2017, show two views of the work in progress, with the new surface growing up in good order.

Henfield Common 1: A view of the common with a wide-angle lens, early October 2019 on a misty morning. I photograph the common on a regular basis, every few months, from 11 Fixed Points, with varying directions at each point. The data goes to support the work of the Joint Commons Committee.

Henfield Common 2: As the view above, but on a tall tripod, pointed down at the commons grasses.

Henfield woods 1-3: Three views of the woodland in early April 2019, from the footpath that runs from Henfield Common North, through the woods to Swains Farm. There had been considerable clearing of tree growth and ground clearance as part of the management of the woodland by the Joint Commons Committee. Some ground plants were poisoning the woodland, and tree growth will be much improved by the clearance of superfluous plants. The woods are becoming lighter and healthier. There have been the usual grumbles from local people who don't want change of any kind - but woodlands have been managed since medieval times, with coppicing and clearing, all to improve the habitat.

Tree bark, Henfield woods: The bark of a falling tree in the woods near Henfield Common North. Early April 2019.

Henfield Common: A view in early April 2019 of the reed bed on the common as seen from Henfield Common North. The grass surrounding the bed has has been cut.