windmill - on the common 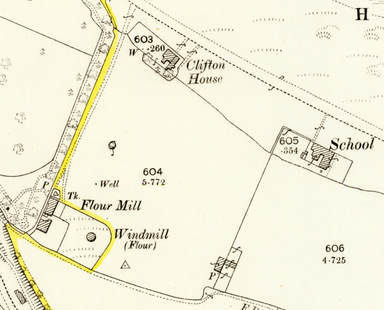 The windmill on the common stood on the edge of what is called the Lydds. A footpath of about 100 yards leads up to the Mill House from the Brighton road, and the mill stood in what is now the garden of the Mill House, seen marked on the 1897 map on the left. The mill was a post-mill, i.e. the body of the mill rotated on a central post - like the existing post-mill "Jill" at Clayton. It may have been built in the 1850s, and there were certainly mills on the site from Tudor times. The mill probably drove three pairs of stones - the usual two peaks and a pair of French burrs - and was known variously as the New Mill or as Barringer's Mill. The body was, unusually, painted black.

James Neal was a Henfield millwright and was first listed in a directory of 1839 and was living in Neptown in 1844. He certainly worked on the mill on the common in the 1840s, and the inscription "J. NEAL MILLWRIGHT 1844" was found on the ironwork inside the mill.

According to some sources, the mill had stopped working in 1885. In 1881 the miller was listed as Arthur Smith, aged 66, a "Miller Employing 5 Men". He was unmarried but had a housekeeper called Mary Ann Holder and a servant called Ann Newnham. It was functioning in the 1890s. At a later date, a glass structure was put on the roof and it was used as an observatory by Eardley Hall of Barrow Hill House. At that time, the millstones and machinery were removed. In 1936, the mill was owned by Mr. Tobitt, the grocer and owner of an antique shop in the village. In that year the roundhouse was described as single-storey and made of black, tarred brick. Only 3 of the 4 sweeps (sails) remained.

In the photographs it's clear that the body of the mill (the "buck") was painted black, whereas the tradition was that the moveable parts of a mill were painted white, and the static sections only (for example, the roundhouse) would be painted black.

Windmill, common 1: A picture from the village May Day Festival of 1923, taken on the common showing the windmill in its location above the Lydds and the common - the Mill House is to its right, and the mill was in what is now the Mill House garden.

Windmill, common 2: The mill, still looking good, with the little lookout hatch let into the roof. This was created for use as a little observatory by the owner, but was used by lookouts in the Second World War.

Windmill, common 3: The mill after being set on fire in the 1950s - a casual bit of arson by a local lad (known to me in later years).

Windmill, common: This picture is taken from a hand-coloured postcard of 1915, and shows two men on one of the sweeps.

Windmill, common: An undated photo of the mill, probably taken from the Lydds and looking up.
Location