The Adur rises from two separate sources. The western Adur rises at Slinfold from where it flows around Coolham and then through Shipley, where it meets Lancing Brook and flows on to West Grinstead and Knepp Castle. The western Adur is tidal as far north as Bines Bridge near Bines Green, south of West Grinstead. The eastern Adur rises at Ditchling Common, in East Sussex, from where it crosses into West Sussex and meets another major stream at Twineham. At Shermanbury, the eastern Adur is fed by the Cowfold Stream. At Henfield, the fields to the east of the river flood regularly during winter rains and are known as the "brooks". The map below shows the whole area. There are two footbridges across the river: Eatons Bridge (A) and Bineham Bridge (B). A third bridge - Betley Bridge - is further north towards Partridge Green. The extent of the water in the levels east of the river can be seen at (C). Rye Farm, in the south-east corner was flooded regularly until a previous owner built up a dyke around the pond (D)  to shelter the house. Hollands Lane, part lane, part footpath, runs east-west from Lower Station Road to meet West End Lane by Harwoods. The section marked (E) is not navigable by car. The fields (F) next to the Downs Link - just peeping into the top right of the map - are now built on as a development called Bishop Park. There are many ancient and interesting houses in this map view, including Ameys Cottage, Blundens, Buckwish, Canons, Catsfold, Dears Farm, Frogshole, Godsons, Grays Farm, Harwoods, Lashmars Hall, Leeches, New Inn and Rye Farm. 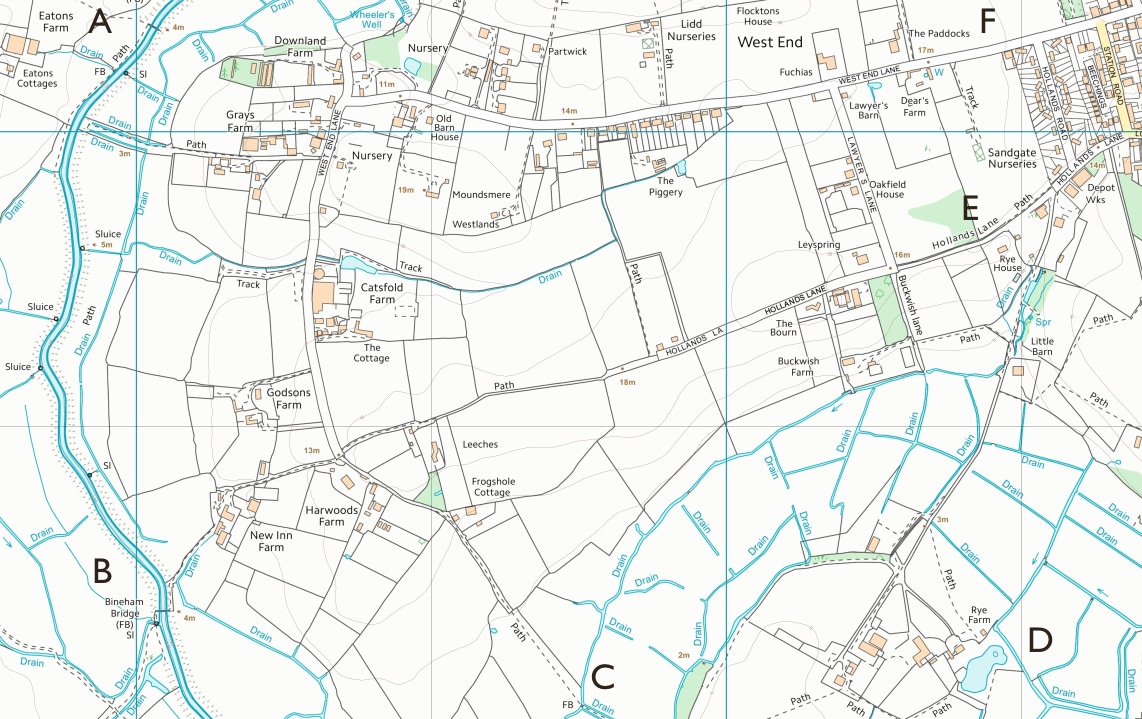 Eatons footbridge, river Adur: A narrow road runs off the end of West End Lane and then becoms a footpath leading down to the river Adur. Eatons footbridge is the main foot route across the river and fields to get to the Fountain at Ashurst on the opposite bank. It was closed for renovation for some years, but is now renovated and re-opened. This part of the river was one of the places where wharves were constructed in the early 19th century to improve transport by, and access for barges.

Adur from Chates: The lane to Chates runs to the left off Betley Lane (which itself runs off Stonepit Lane). The path stops at a field and style, with the river Adur in the distance. This photo, also taken after the heavy December and January rains, shows the field completely flooded with just a strip of land separating it from the river in the background.

Betley Bridge: Betley Bridge, which crosses the Adur, lies on the former railway line known as the Downs Link, north of Henfield and south of Partridge Green. This view from January 2016 shows the bridge looking north.

The pictures below were all taken in late January 2016 at Mock Bridge and show the effects of the winter floods. The floodwaters are up to the top of the bridge arches and go over the adjoining brooks. In previous years, extra-powerful flooding used to block the roadway.

Adur south from Mock Bridge: This is a view down the river looking south. The slightly higher banks, plus the flooding on the brooks north of the bridge, mean that the fields are slightly less flooded here.

Brooks from Mock Bridge 1-2: These two photos show part of the extent of the flooding over the brooks, looking north from Mock Bridge. Photo 2 gives a distant view of Shermanbury Place.

Brooks from Mock Bridge 3: A closer view of Shermanbury Place across the brooks.

Flooded gateway at Mock Bridge: You can gauge the extent of the flood by the height of the water up this footpath gate. Still private fishing though.

Brooks flooding: A view of the river and the brooks from the western part of Hollands Lane in January 2017.

Eatons bridge 1: The new bridge across the river by Eatons Farm - enthusiasts can resume their walk to the Fountain at Ashurst! A view from the east bank, mid-July 2018.

South from Eatons bridge: Taken from the eastern end of the bridge, looking south in mid-July 2018.

Kayaks on the Adur: Kayaking up from Shoreham - paying by the hour - is a popular pastime in summer. This couple were paddling north. Mid-July 2018.

View south from the Adur: Taken from the east bank, walking south to Bineham bridge, with the inevitable Chanctonbury Ring in the distance. Mid-July 2018.

Adur flood plain: A photo from mid-July 2019 showing the flood plain from the southern part of the Downs Link path.